Was the first optical toy to create a true sense of motion.

The Phenakistascope or spindle viewer was invented in 1831 by Belgian physicist Joseph Plateau and simultaneously in Vienna by Simon Stampfer who called his invention a stroboscope.

The Phenakistascope consists of a disc with 10-16 slots equally spaced around the edge. Between each slot is an image. The user spins the disc and looks through the moving slots at the disc's reflection in a mirror. The slots stop the images blurring together so that the user sees a rapid succession of separate images. When the images are identical the user will a stationary image. Scientist Michael Faraday had experimented with such a disc.

Plateau realised that if he drew images which changed slightly each time showing a sequence of moves the brain would interpret this as a moving image.

This is our own new version from June 2019  - More of a mechanical device.

CONTENTS: Black wooden circular disc, 7 x patterns, 1 x blank (for you to design your own), handle, motor housing, small wooden disc and Instructions. - YOU NEED A MIRROR AND A PAIR OF SCISSORS.

FACE A MIRROR - HOLDING THE PICTURE TOWARDS THE MIRROR. SPIN THE WOODEN DISC AROUND  AND LOOK THROUGH THE SLITS TO SEE THE FIGURES MOVE. 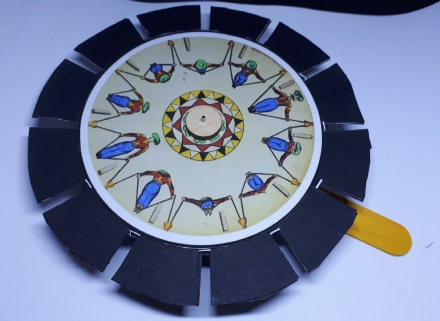